An exclusive and elegant living room in the
center of Rome.

From our most attached clients to whoever had the pleasure to taste even just for one time the delicacies of Camponeschi, and even for food critics, the opinions are the same: Camponeschi Restaurant is the best restaurant of Rome.
The journey of Camponeschi in the field of roman cuisine industry begins in the 30’ with Tommaso, and follows up with his son Marino during the 50’. He opens together with his father and his siblings Benito and Rosa, one of the most trendy restaurant during “La Dolce Vita”, and soon later gives rise to the Agricoltural Holding Camponeschi. The 80’mark the beginning of the third generation: Alessandro opens whit his father Marino Restaurant Camponeschi in Farnese square making it an elegant and exclusive living room.
Here many famous and important people passed by during the years, from Al Gore to Shimon Peres, Michail Gorbaciov and Ciampi, and also many Hollywood stars and icons from the pop music like Sylvester Stallone, Ben Stiller, Quentin Tarantino, Catherine Zeta Jones, Charlize Theron, Michael Douglas, Mike Dillon, Justin Timberlake, Michael Bublé, Sting, Liza Minnelli and more recently Naomi Campbell, Andy Garcia e Kerry Kennedy. Of course not just overseas stars are likely to spend time at Camponeschi , Riccardo Scamarcio and Claudio Santamaria attend our restaurant very often, just like two other icons of Rome like Sabrina Ferilli and Vincenzo Montella.
The History of Camponeschi went side by side with the changes that the center of Rome experienced, with his own charm and contradiction. When the owner of the restaurant, Alessandro Camponeschi, opened during the 80’ the neighborhood was much different, it was full with artisanal boutique with their historical workshops, handed down from fathers to sons, but with time had to give away to bar and commercial restaurant; all changes that he believes created a small hitch in the requalification of the historical center, bringing a distorted vision of beauty. He therefore hopes that roman people would gather again in the historical center, and that they would recognize themselves in those activities that along the years stayed loyal and respectful to the marvelous context that the center or Rome represents.

Togheter for more than 30 years

In occasion of the award ceremony of the best american flying company, the Envoy, an award has been given to Camponeschi for his “Made in Rome” food that has been serving in the business class. Together with Alessandro Camponeschi to collect the prize there was Rino Barillari.

Thirthy years anniversary. A special event, under the banner of good taste, style and tradition, the three milestones for Camponeschi’s success.

Fragments of Hollywood in Farnese square. Scent of golden statues and extraordinary partnership for Ambi Spring Gala. A special prize awarded to Andy Garcia as a “Friend of Italy”. 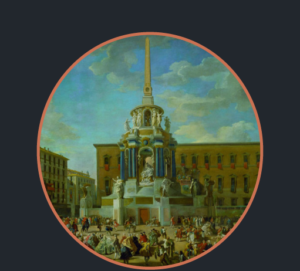 “Farnese square still preserve that elegant and refined atmosphere for which stood out since the late Renascence. The majestic Farnese’s palace, and his opposing square, was the main site for Farnese family businesses, this led both the inside and the outside of the palace to a quiet and aristocratic atmosphere. Of course social occasions to fill up the square were not missing, royal and religious courts mostly, very different from markets fairs, indeed Farnese square never hosted the market and always kept a noble and upscale atmosphere. Even when the French ambassadors took up residence in the palace, since the early sixth Century, the square has always been used to celebrate meaningful events, organizing sumptuous celebrations. Over the years the prestige of Farnese square grew up exponentially, becoming the location of the roman jet set as well as the main set for the movie “Un maledetto imbroglio” by Pietro Germi, that described, as in many movies from end of the 50’, the charm of Rome.”